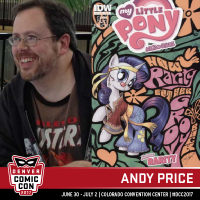 Andy Price is artist on the hit My Little Pony: Friendship is Magic, a comic based on the popular children’s TV show of the same name. Together with fellow DCC Guest Katie Cook, Andy also created the My Little Pony Micro-Series centered on Rarity, the unicorn. Price has done illustration work for DC Comics, Marvel Comics, Innovation Comics, and the Rittenhouse Archives. His other comics work includes licensed titles based on the television series Quantum Leap and WordGirl. Price is a graduate of Austin High School in Decatur, Alabama, and the Joe Kubert School of Cartoon and Graphic Art. He currently resides in Madison, Alabama, with his wife, Alice.