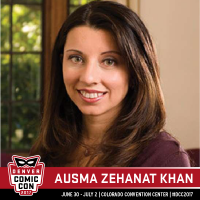 Ausma Zehanat Khan’s new book is her first fantasy novel The Bloodprint, the first in a four-book series that explores the very present topics of religion, gender, and politics, wrapped in the wonder, darkness, and hope that only pure fantasy can produce. She is best known for her award-winning mystery The Unquiet Dead, which follows a Canadian police officer who is looking into the death of a local man who fell off a cliff – who turns out, may have been one of the Bosnian war criminals responsible for the massacre at Srebrenica in 1995.

Ausma is a British-born Canadian living in the United States whose own parents are heirs to a complex story of migration to and from three different continents. A former adjunct professor at American and Canadian universities, she holds a Ph.D. in International Human Rights Law, with the 1995 Srebrenica massacre as the main subject of her dissertation. Previously the Editor in Chief of Muslim Girl Magazine, Ausma Zehanat Khan has moved frequently, traveled extensively, and written compulsively – but now calls Denver home.

Appearing Friday and Saturday only.