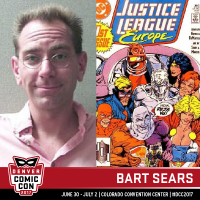 Over the years, Bart Sears has been active in multiple industries, including: comics (Marvel Comics, DC Comics, Image Comics, Dark Horse Comics, Valiant Comics), toys, and computer games.This includes runs on Justice League America and Justice League Europe,[1] Legends of the Dark Knight, X-O Manowar, Turok, Violator and The Helm. Sears has worked as a designer of action figures and packaging, most notably for Hasbro on the C.O.P.S., G.I. Joe, and World Wrestling Federation toy lines and on many of the early X-Men action figures for ToyBiz.

Sears ran his own comic company briefly in 1994, called Ominous Press. In 2000, he joined CrossGen as an artist, and was later promoted to act as one of the company’s art directors. More recently, Sears worked in-house for Heatwave Interactive creating concept art and story for several properties, as well as developing in-game assets for multiple games across various platforms. Most recently, he has re-launched Ominous Studios – with fellow DCC Guests Ron Marz and Tom Raney – with which he is now the Chief Creative Officer.