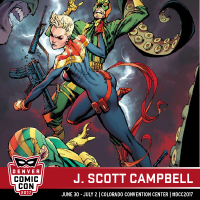 He rose to fame as an artist for Wildstorm Comics, though he has since done work for Marvel Comics (most notably as a cover artist on The Amazing Spider-Man), and the video game industry. After graduating from high school in Aurora, Colorado, as he prepared to show his samples at the 1993 San Diego Comic Con, the series WildC.A.T.S premiered by Jim Lee’s publishing studio, Wildstorm Productions (then called Homage Studios). One issue advertised a talent search for which readers could submit artwork, so Campbell put together a package that included a four-page WildC.A.T.S story and sent it in. A week and a half later, Jim Lee telephoned Campbell and asked him if he would move to San Diego to work for him.

Campbell went on to co-create the teen superhero team Gen¹³, initially co-written by Brandon Choi and Jim Lee, but Campbell became a co-writer with issue #3 of the 5-issue mini-series. The team was eventually given their own regular ongoing series, which debuted in March 1995. Campbell was co-writer on the series until issue #18, and was the regular artist, leaving the book after issue #20 (June 1997). In 1998, Campbell, together with fellow comics artists Joe Madureira and fellow DCC 2017 guest,Humberto Ramos, founded the Cliffhanger imprint as part of Wildstorm Productions. He launched his comic series Danger Girl through this imprint. The story, which followed the adventures of a group of female secret agents, made the most of Campbell’s talents drawing well-endowed women and dramatic action sequences.

Most recently, Scott has been doing covers for Marvel, including 2017 variant covers for Red Sonja, Electra, Ben Reilly: Scarlet Spider, and X-Men: Gold.