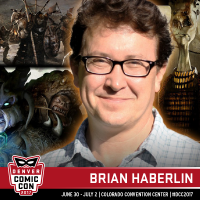 Brian Haberlin started in comics at TopCow Productions, he headed their computer coloring department and developed many of the modern methods of comic book production. While there he co-created Witchblade as well as several other characters, and eventually ran the creative side of the company. He formed his own studio in 1995 producing commercial illustrations and digital coloring for Marvel, DC Comics, Disney, Dreamworks, Verizon, Nascar and Image Comics to name a few. He then started Avalon Studios with Whilce Portacio and co-created/created many comic titles such as Stone, The Wicked, Hellcop, Houdini: The Man from Beyond, Jinn, Aria, M-Rex, Area 52 and Athena Inc. He became Editor-in-Chief for Todd McFarlane productions in 2006 and pencilled and inked their popular Spawn title for 2 years with David Hine as writer. He currently teaches at Minneapolis College of Art and Design and is partner in Anomaly Productions producing graphic novels, comics and apps. Current titles from Anomaly Productions are Faster Than Light, Anomaly 2, Fury Formula and Between Worlds. He has won and been nominated for multiple industry awards in both comics and apps and his work is in the permanent collection of the Smithsonian Museum.