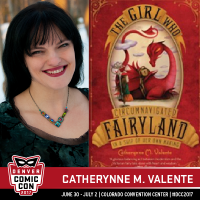 Catherynne M. Valente’s 2011 children’s novel, The Girl Who Circumnavigated Fairyland in a Ship of Her Own Making debuted at #8 on the New York Times Best Seller List. The book is characterized as a “fantastical tale that’s somewhere between Lewis Carroll and Terry Pratchett”, and follows twelve-year-old September, who is taken to the world of Fairyland where she has to retrieve a witch’s spoon from the fickle Marquess.

Her novels have been nominated for Hugo, World Fantasy, and Locus awards. Her 2009 book, Palimpsest, won the Lambda Award for GLBT Science Fiction or Fantasy. Her two-volume series The Orphan’s Tales won the 2008 Mythopoeic Award, and its first volume, The Orphan’s Tales: In the Night Garden won the 2006 James Tiptree, Jr. Award and was nominated for the 2007 World Fantasy Award. In 2012, Valente’s work won 3 Locus Awards: Best Novelette (White Lines on a Green Field), Best Novella (Silently and Very Fast) and Best YA Novel (The Girl Who Circumnavigated Fairyland in a Ship of Her Own Making). The sequel to The Girl…, The Girl Who Fell Beneath Fairyland and Led the Revels There, featured at #5 on Time Magazine’s Best Fiction of 2012 list.

Valente is active in the crowdfunding movement of online artists, and her novel The Girl Who Circumnavigated Fairyland in a Ship of Her Own Making was the first online, crowdfunded book to win a major literary award before traditional publication.
For her speculative fiction novels she has won the annual James Tiptree, Andre Norton, and Mythopoeic Fantasy Awards. Her short fiction has appeared in Clarkesworld Magazine, the World Fantasy Award–winning anthologies Salon Fantastique and Paper Cities, along with numerous Year’s Best volumes.