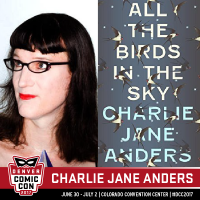 Charlie Jane Anders is an award-winning author of All the Birds in the Sky, which was listed on Time Magazine’s “Top 10 Novels” of 2016. She is the organizer of the Writers With Drinks reading series, and was a founding editor of io9, a website about science fiction and futurism. Her stories have appeared in Lightspeed, Asimov’s, The Magazine of Fantasy & Science Fiction, and many others. Her novella “Six Months, Three Days” won a Hugo Award – and she is following up with a sequel this Fall, Six Months, Three Days, Five Others. She has won the Lambda Literary Away for her work in the transgender category and she has been nominated for both the Nebula and Sturgeon Awards.