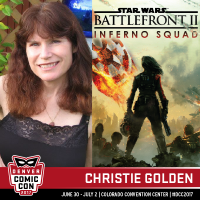 Christie Golden is an 8-time New York Times best-selling author who has written over 50 novels and several short stories in science fiction, fantasy, and horror. Her novels include Star Trek and a number of game-based stories, such as World of Warcraft, Assassin’s Creed, and StarCraft; she has also written many Star Wars series novels, which are considered part of the “new canon” of the Star Wars universe. She has also written stories for the Buffy the Vampire Slayer and Angel fiction anthologies.