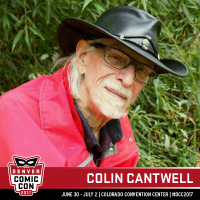 Death Star Creator, Colin Cantwell, not only designed the space ships (i.e. the X-Wing, TIE Fighter, Death Star, original Millennium Falcon, etc.) for the first Star Wars’ movie, but he also was the first person to use model kit parts to build the ship models (now called kit-bashing). Throughout his amazing career, Colin has been involved in several iconic projects including: designing the space scenes and suggesting the theme song for 2001, A Space Odyssey; being the Hal 9000 Computer that gave Walter Cronkite the flight progress to broadcast live on national TV during the first moon landing; designing the first OmniMax theater in San Diego; developing the first multi-color computer monitor for HP and much more. In addition, Colin worked on several other movies including, War Games, Close Encounters of a Third Kind and Buck Rogers. You can learn about Colin and his other projects on his website http://www.colincantwell.com .