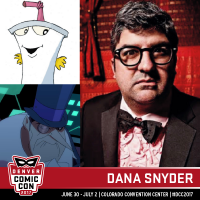 Dana Snyder is a comedian, actor, producer, voice artist, and man about town! He is best known as the voice of Master Shake in Aqua Teen Hunger Force, Granny in Squidbillies, The Alchemist in The Venture Bros., Gazpacho in Chowder, Mr. Baldwin in Fish Hooks and for his latest role as Lucas on Your Pretty Face Is Going To Hell.