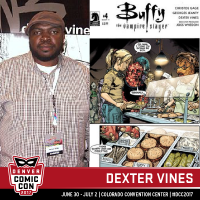 Dexter Vines is one of comics most prolific and well respected artist inkers and cover artist in the business with over 20 years’ experience. Having worked on some of the biggest titles from Superman/Batman, Civil War, and, Dexter is still going strong with monthly work on Buffy The Vampire Slayer Season 11 and Marvel’s Han Solo series. Dex’s other titles include work for both Marvel and DC, like Hulk, Thor, Nova, Wonder Woman and Teen Titans. He has been the nominee for two Eisner awards for Best Penciller/Inker team for his work with Steve McNiven on Marvel’s Wolverine: Old Man Logan, and won an Inkwell award in 2012 for his inking work.