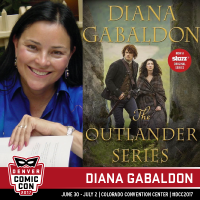 Diana Gabaldon is the author of the historical, time-travel adventure series Outlander. The award-winning books have been New York Times bestsellers and the series has been made in to a wildly popular television series on Starz, where Gabaldon serves as advisor and co-producer. Having begun her writing career creating comic book scripts for Disney, she has also written a graphic novel titled The Exile, which is set in the Outlander universe, told from the point of view of a feature character; the comic is illustrated by Hoang Nguyen and published by Del Rey. Her current writing project is the ninth novel in the Outlander series titled Go Tell the Bees That I Am Gone.

Gabaldon’s education is extensive, though not directly related to her writing work. She holds three degrees in science: zoology, marine biology and PhD in Quantitative Behavioral Ecology, as well as an honorary doctorate in Humane Letters. Her expertise led her to spending 12 years as a university professor, and she has written articles and textbooks, and was a contributing editor for The Encyclopedia of Computers. Diana and her husband, Douglas Watkins, have three adult children and live in Arizona.