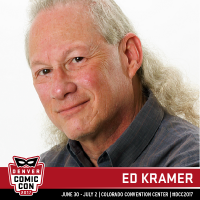 You may not know his name, but you’ve definitely seen pioneer Visual Effects Artist Ed Kramer’s work. Ed spent twelve years as a Senior Technical Director and Sequence Supervisor for George Lucas’ famed VFX company, Industrial Light + Magic. His CGI effects work appeared in all three of the STAR WARS Prequels, and in the 2006 OSCAR-winner Pirates of the Caribbean II: Dead Man’s Chest. He led the teams creating the Scarab beetle shots in The Mummy and The Mummy Returns, the Rock Monster shots in Galaxy Quest, the Droid Factory and End Battle shots in Attack of the Clones, and he contributed to such classics as Jumanji, Twister, The Perfect Storm, Harry Potter 2, Jurassic Park: The Lost World, Stargate, Deep Impact, Herbie Fully Loaded, 101 Dalmatians, Van Helsing, and many other seminal visual effects blockbusters from 1992 through 2006. He has worked with such Visual Effects luminaries as Douglas Trumbull, Dennis Muren and John Knoll, and Directors like George Lucas, Steven Spielberg and Michael Bay. The most recognizable creation from Ed’s more than 30 years as a CGI professional is the iconic Columbia Pictures “Lady with a Torch” logo, which he helped create for visual effects wizards Joel Hynek and Jeff Kleiser.

Ed made the difficult decision to leave the movie life in 2006, when, after twenty-four feature films, he was part of a Senior-level round of layoffs. Moving his family to Denver in 2006, Ed knew that when you make movies, the movie always has to come first, and being present as a Dad while his kids were growing up was more important. Freelance work in Denver has included clients like STARZ, Lockheed-Martin, the Discovery Channel, and even a logo for an event coordinated by Governor John Hickenlooper, for which Ed received a Platinum Pixie award. He also spent a year creating CGI for futuristic medical simulators used to train surgeons virtually on complex new procedures.

Ed is an authority on the History of Computer Graphics, and has spoken at conferences worldwide, including SIGGRAPH, FMX in Stuttgart, Germany, and the National Association of Broadcasters (NAB), and at local venues Mile Hi Con, Starfest, and both the Denver and Colorado Springs ComicCons. In addition to his freelance work created under the company name edk/3d, Ed has been a Full-Time Instructor at the Art Institute of Colorado for more than five years, teaching the next generation of CGI artists his professional approach to advanced Modeling, Lighting, and Dynamics techniques.

Ed is currently writing a book and producing a documentary about the Artists behind some of the most famous CGI moments in movie history, called The Wizards of Hollywood: Movie Magic Secrets from the Artists who Invented CGI.