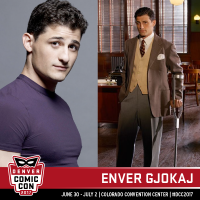 Enver Gjokaj is an American film and television actor known for his roles as Victor in Joss Whedon’s science fiction television series Dollhouse and as Agent Daniel Sousa on Agent Carter. Gjokaj has also appeared in the films The Express alongside Dennis Quaid, Taking Chance with Kevin Bacon, and Eagle Eye opposite Shia LaBeouf. Prior to his series regular role on Dollhouse, he appeared in the made-for-TV film Filthy Gorgeous and also had a recurring role on the television series The Book of Daniel. He also guest starred in episodes of Law & Order: Criminal Intent, Community and The Unit. In 2012, Gjokaj cameoed in Whedon’s The Avengers as a policeman involved in the relief effort during the final battle in New York City.