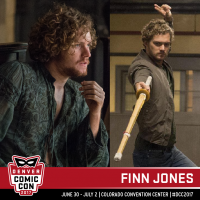 Finn Jones is an English actor, best known for his role as the skilled warrior and popular tournament champion Ser Loras Tyrell, The Knight of Flowers, in all seasons of HBO’s Game of Thrones to date. In 2017 he will be playing the lead role of Daniel Rand/Iron Fist in Marvel and Netflix’s series Iron Fist (March 17th) and The Defenders.

In 2010 Finn appeared alongside eleventh doctor Matt Smith as Santiago Jones in the Dr Who spin off The Sarah Jane Adventures. More recently he has featured as the Bloomsbury Group poet/artist Julian Bell in BBC2’s Life in Squares (2015).
Finn has also had a number of film roles including The Last Showing alongside horror legend Robert Englund (2014) and last year completed Leatherface, the 2017 reboot of the Texas Chainsaw franchise.

Finn’s theatre credits include Boswell in A Laughing Matter, Lysander in A Midsummer Night’s Dream, Lenny in the Homecoming, Gerald Arbuthnot in a Woman of No Importance, Northumberland in Richard II, George Deever in All My Sons and Andrei Prozorov in Three Sisters.

Finn is also a DJ and has toured and played individual sets worldwide.