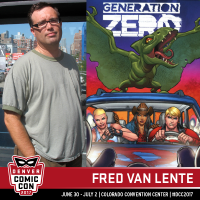 Writer Fred Van Lente is the co-founder of Evil Twin Comics, along with (fellow DCC guest) artist Ryan Dunlavey, which produces non-fiction comics with an historical focus, such as Action Philosophers, Action Presidents, and Comic Book Comics, about the history of the medium itself.