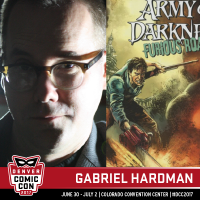 Gabriel Hardman is the co-writer and artist of Invisible Republic as well as writer/artist of The Belfry and Kinski, all published by Image Comics. He also co-wrote (with Corinna Bechko) Star Wars: Legacy for Dark Horse Comics, and Planet of the Apes for Boom! Studios. He has drawn Hulk, Secret Avengers and Agents of Atlas for Marvel as well as the OGN Heathentown for Image/Shadowline. He’s worked as a storyboard artist on movies such at Logan, Interstellar, Inception, and Tropic Thunder. He lives with his wife, writer Corinna Bechko in Los Angeles.