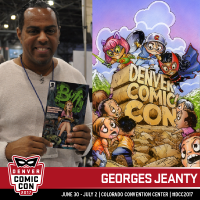 Comic Artist Georges Jeanty returns to DCC to help us celebrate 20 years of Buffy the Vampire Slayer. Georges’ first break into comics was Paradigm #1 (1994) published by Caliber Comics. Soon after, he worked on the bad girl books for London Night Studios, laying his artistic hands on various characters like Poizon, Stryke and Razor. This led to his work with other underground comic book publishers, as well as being a member of Gaijin Studios.

Later, Georges broke in with DC Comics, on titles like Green Lantern, Superboy and Superman, followed by an offer from Marvel Comics to perform the art chores a new title, Bishop: The Last X-man. Later Marvel work also included the Gambit series, Weapon X, and several issues of Deadpool, for which he received rave reviews.