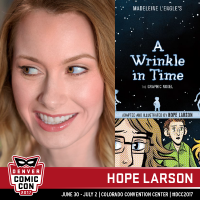 Hope Larson is a cartoonist and comic book artist, who is currently working on DC Comics Batgirl with artist Rafael Albuquerque. Her past work has been featured in several anthologies as well as several of her own full-length books, including an adaptation of Madeline L’Engle’s A Wrinkle in Time. Larson created her own publishing imprint, Tulip Tree Press, in 2006 under which she published the acclaimed title House of Sugar, among several other mini-comics and short stories.