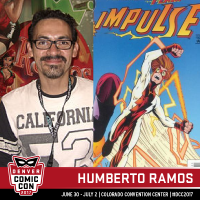 Humberto Ramos is a Mexican comic book penciller and cover artist, best known for his work on American comic books such as Impulse, The Spectacular Spider-Man, The Amazing Spider-Man and his creator-owned series Crimson. After his work on the Flash spin-off Impulse for DC comics, Ramos founded his own imprint, Cliffhanger, with several other comic book artists in order to publish creator-owned series, like his Crimson and Out There. Since leaving Cliffhanger, he has done various interiors and covers for Marvel, including Wolverine, Extraordinary X-men, several Spider-Man titles, and most recently Champions, among many others.