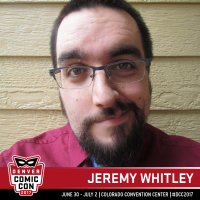 Jeremy Whitley is a comic book writer from Durham, North Carolina. He is the writer and creator of both “Princeless” and its spin-off “Raven: The Pirate Princess”. He recently launched the hit superhero comic “The Unstoppable Wasp” from Marvel Comics with artist Elsa Charretier. He is a frequent contributor both for Marvel Comics and IDW Comics where he has written a number of “My Little Pony” titles.