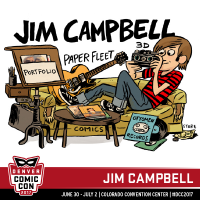 Jim Campbell is a cartoonist, comic book colorist, and animator who is known for his work on Patrick McHale’s Over the Garden Wall TV series on Cartoon Network and the comic books from Boom! Studios. Jim has been drawing comics since teaming up with the Meathaus collective in 2001. He has been a color artist for Dark Horse, Marvel, Spongebob Comics, Mad Magazine, and Tony Millionaire for several years. His Over The Garden Wall comic was nominated for a 2016 Eisner Award. He also created a delightful creator-owned digital comic, At the Shore, available from Alternate Comics.