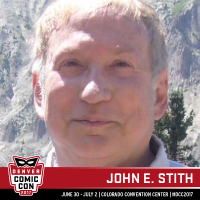 Science fiction and mystery author John E. Stith writes across many worlds. His books have been translated to French, German, Italian, Japanese, Portuguese and Russian and are even available in braille for the sight-impaired. His stories have been categorized as “Hard science fiction,” a label given to those stories thoroughly researched to play fair with the rules of science; something any die-hard SciFi fan can appreciate.

It was during the summer Science-Math Institute for High School Students at Cloud State College, John served as editor for the school paper, but several more years would pass before the urge to write, strengthened by years of loving to read, was too compelling to ignore. His stories vary, but his books are packed with suspense, mystery, and humor.

Stith holds a B.A. in physics from the University of Minnesota, has served as an Air Force Officer, where he worked at NORAD Cheyenne Mountain Complex. The passion for science runs in his family, as his father George worked at the White Sands Missile Range on such projects like the rocket sled.

He has appeared on a live nationwide PBS broadcast or Science-Fiction Science-Fact (SF2) and his work has also been sold to film and television. His novel Reckoning Infinity was chosen as one of Science Fiction Chronicle’s Best Science Fiction Novels, Redshift Rendezvous was picked as a Nebula Award nominee and Manhattan Transfer received an honorable mention from the Hugo Awards and a nomination from the Seiun Award in Japan.