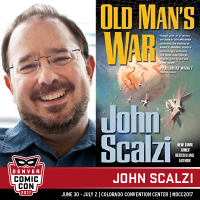 John Scalzi is a Hugo Award winning science fiction author, online writer and former president of the Science Fiction and Fantasy Writers of America. His popular series, Old Man War, has had three of its novels nominated for Hugo Awards and his novel Redshirts won the 2013 Hugo Award for Best Novel. He has also written nonfiction and columns on many topics such as astronomy, video games, film, politics and others; he worked as a creative consultant for the television series Stargate Universe.