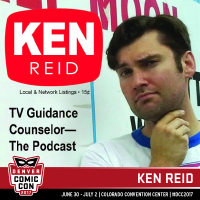 Stand-up Comedian Ken Reid is probably best known for his unique podcast, TV Guidance Counselor, where he interviews TV actors and film celebrities from the 70s, 80s and 90s, and other comedians about their TV experiences – both in front of the camera and in front of the tube as kids. His guests have included the likes of comedian Kumail Nanjani, James Adomian, Amy Sedaris and Vanessa Angel.

The Boston native is known for his storytelling, and has appeared on TV shows such as The Moth and Risk!, and created the show, The Damaged Goods Auction, in which performers tell stories about objects in their lives and then auction of the object to its audience. Reid has performed at the Boston Music Awards, the Charleston Comedy Festival and the Eugene Mirman Comedy Festival, and in 2013 he took over Thursday nights at the Comedy Studio with his show, Ken Reid’s Secret Menu. He has toured with his own one man shows, with fellow comedian Todd Barry, and has opened for the likes of Patton Oswalt, Bob Saget and John Oliver.

Ken will be interviewing a DCC guest near you, so make sure to tune into his podcast tvguidancecounselor.tumblr.com for the inside story about your favorite celebrities.