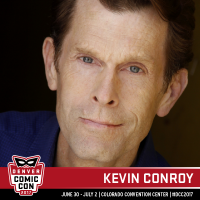 As a voice actor, Kevin Conroy is best known for his starring role in the acclaimed Batman: The Animated Series. He continued to voice-play Batman in the subsequent spin-off series: The New Batman Adventures, Batman Beyond, Justice League and Justice League Unlimited, all of which take place in the DC animated universe (DCAU). His tenure in the role also includes the theatrical film Batman: Mask of the Phantasm, and the direct-to-video films Batman & Mr. Freeze: SubZero, Batman Beyond: Return of the Joker, and Batman: Mystery of the Batwoman. He also voiced Batman for the character’s guest appearances in the DCAU’s Superman: The Animated Series, Static Shock, and The Zeta Project.