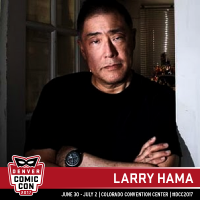 Larry Hama is a writer/cartoonist/illustrator/actor/musician who has worked in comics, tv and film. He is best known as the writer of Marvel’s G.I. Joe comics in the eighties, and as the writer of Marvel’s Wolverine in the nineties. More recently he has scripted Batman Shadow of the Bat, and Woman for DC Convergence, G.I. Origins and G.I. Joe A Real American Hero for IDW, Call of Duty: Black Ops for Dark Horse, and done layouts for Deathstroke at DC. He was Artist in Residence at Asian/Pacific/American Arts Institute at NYU in 2012. Most recently, he is the author of The Death of Captain America, a prose novel for Marvel (hardcover) that features characters (Winter Soldier, Black Widow, Nick Fury) who are prominent in the new Captain America movie.
In comics, he has written, edited or drawn for Avengers, Blaze, Nth Man, The Nam, Conan, Batman, Wonder Woman, Bizarre Adventures, X-Men, Spider-Man, Daredevil, and dozens more. His illustrations and cartoons have appeared in National Lampoon, Esquire, New York and Rolling Stone. He has appeared on Broadway in Stephen Sondheim’s “Pacific Overtures” and on TV in M*A*S*H, SNL and Another World.