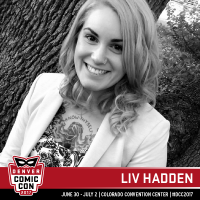 Debut novelist Liv Hadden has been writing ever since she was a little girl. But, it wasn’t until 5th grade when her teacher said she’d one day write a book that she started taking it seriously.

Her Shamed series began in college, when Hadden employed her writing as an outlet for her feelings during a serious bout of depression. After a brief, yet impactful first night of writing, she dreamt of a shadowy figure, tormented and demonized by their own mind and realized this was the shadow of pain that hurting people everywhere felt.

She woke from her dream feeling more energized that she had in months, picked up her computer and began to write. “I felt if ever there was a story inside me and a character worth taking the leap, it was Shame and this story,” says Hadden. “This one in particular is personal in nature, and perhaps the very reason it’s so close to my heart.”

Hadden has her roots in Burlington, Vermont and has lived in upstate New York and Oklahoma, where she went to college at the University of Oklahoma,, and earned her degree in Environmental Sustainability Planning & Management. She now resides in Austin, TX with her husband and two dogs, Madison and Samuel and is an active member of the Writer’s League of Texas.

Incredibly inspired by artistic expression, Hadden immerses herself in creative endeavors on a daily basis. She finds great joy in getting lost in writing and seeing others fully express themselves through their greatest artistic passions, like music, body art, dance and photography. “I get chills when I have the great privilege of seeing someone express their authentic selves,” says Hadden. “I believe it gives us a true glimpse into the souls of others.