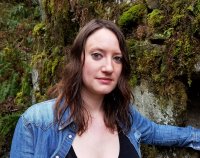 Maureen is a journalist, paranormal investigator, researcher, and media personality specializing in weird mysteries, the anomalous, sci-fi, and geek culture.

She was a founding member of the UFO media company Open Minds and spent over six-years as a full-time UFO researcher and journalist. She wrote for the internationally-distributed print magazine, Open Minds and, along with her colleague Jason McClellan, Maureen co-hosted and associate produced over 100 episodes of the popular web series Spacing Out! She also co-organized the largest UFO conference in the world, the International UFO Congress, which was recognized in 2015 by the Guinness Book of Records.

Maureen starred on the investigative docu-drama Uncovering Aliens which aired on Animal Planet, Science Channel, Destination America, and the American Heroes Network and served as an ambassador for the Science Channel’s Are We Alone? week for three years.

While she’s more Scully than Mulder, Maureen is fascinated by the anomalous and is passionate about scientifically investigating paranormal events around the globe. She has interviewed people from all walks of life, including high-ranking military and government officials, celebrities, and alleged abductees. She even served as a paranormal researcher and writer for Tom DeLonge’s (Blink-182/Angels and Airwaves) media empire To the Stars. Currently, Maureen co-runs the geek and paranormal media company Rogue Planet and co-hosts several podcasts including UFO modPod, a bi-weekly show with fellow researchers Jason McClellan and Ryan Sprague.