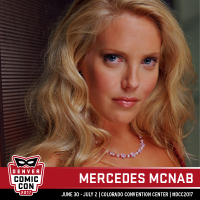 Mercedes McNab is most known for playing Harmony, the longest-running character in the Buffy-verse franchise, appearing in the pilot of Buffy the Vampire Slayer through to the series finale of its spin-off, Angel. Mercedes has also appeared in numerous shows, including Supernatural, Reaper, Psych and Criminal Minds. Her movie credits include both Addams Family movies, Hatchet and Vipers.