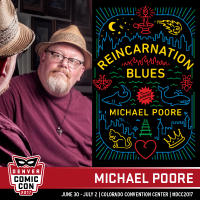 Michael Poore is a Sturgeon Award nominated author whose work has appeared in the Southern Review, Carolina Quarterly, Hayden’s Ferry Review, Asimov’s and Glimmer Train. His story The Street of the House of the Sun was selected for The Year’s Best Nonrequired Reading 2012 and was nominated for a Pushcart Prize. His first novel, Up Jumps the Devil, was hailed by The New York Review of Books as “an elegiac masterpiece.”

Michael’s newest offering will be released in August, entitled Reincarnation Blues: In the tradition of Cloud Atlas comes a wildly imaginative novel about a man who is reincarnated over ten thousand lifetimes to be with his one true love: Death herself.