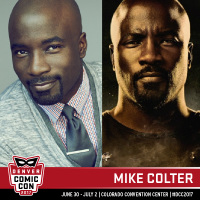 Born and raised in South Carolina, American actor Mike Colter trained to be an actor from an early age. After earning a bachelor’s degree from the University of South Carolina, Colter then moved onto Rutger’s University’s Mason Gross School of the Arts where he received a MFA in acting from the esteemed institution.

Colter’s earliest screen work was in the long running NBC series ER as well as The Parkers starring Mo’Nique in 2002. From there, Colter landed a featured role in the Academy Award winning Clint Eastwood production, Million Dollar Baby. Colter’s next roles found him back on television with roles in Law & Order: Trial by Jury and Law & Order: Criminal Intent before being cast in the film And Then Came Love, starring Vanessa Williams.

Colter’s work on both the small and big screens saw him achieve greater notoriety, eventually leading to a recurring role on the Sarah Michelle series Ringer from 2011-2012. From there, Colter appeared in Men In Black 3 and Kathryn Bigelow’s Zero Dark Thirty, both released in 2012.

In 2013, Colter joined the cast of the popular FX anthology series American Horror Story, appearing during the Coven storyline for three episodes. Following his turn on the horror series, Colter was cast as Agent Locke in the Xbox One series Halo: Nightfall, reprising the role in 2015’s Halo 5: Guardians.

2015 saw Colter cast in his highest profile role yet as Marvel’s Luke Cage in the lauded Netflix series Jessica Jones, starring Krysten Ritter. The series led into a solo Luke Cage series in 2016 and will culminate in the epic series bringing together Daredevil, Jessica Jones, Luke Cage and Iron Fist as The Defenders, set to premier on Netflix later this year.