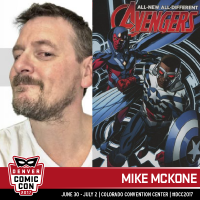 As part of DCC’s Celebration of the Justice League, artist Mike McKone visits us for the first time! Besides his work on multiple JL titles since the late 80s, (Justice League America (1989), International (1987 & 2008), Quarterly (1990), Saga (2013), United (2014), and the Wedding Special (2007)) Mike’s art style is instantly recognizable from his lengthy run on Marvel’s Exiles. Most recently, McKone is rendering spectacular covers for Marvel (The Mighty Captain Marvel, Infamous Iron Man, etc.) and DC comics (Raven, Teen Titans, and more).