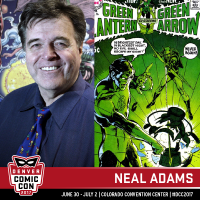 Neal had legendary ‘runs’ on Batman, X-Men, Green Lantern/Green Arrow and Deadman. Adams rescued Batman from the campy TV show, and transformed him into his present, “Avenger of the Night” persona. When people say “modern Batman,” they mean Neal Adams’ Batman. His run led directly to the realistic incarnation seen in Batman Begins, and the The Dark Knight movies. Creator of Ras Al Ghul , now featured in the Arrow series, and pretty much created the Green Arrow, and Merlyn characters we see in the Arrow TV show.

He had the Batman Omnibus, and the Green Arrow, Green Lantern Absolute, and his six-part Coming of the Supermen mini series which was a huge hit.

He also had his graphic novel called Blood from Dark Horse. It featured the first animated lenticular lens cover ever done in this industry!

The 38-page Harley’s Little Black Book, which is an homage to Superman Vs. Ali, is on the stands now. The DC Komandi project is also in the stores, along with tons of variant covers.

There is yet another huge project Neal is working on, but I can’t reveal what that is quite yet. Neal Adams is on fire!