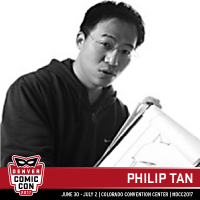 Philip Tan is a professional illustrator and comic book artist. He started working for WildStorm Productions in 2001 on the title Taleweaver. Shortly after he was hired by Image Comics and afterwards by Marvel Comics, where he debuted on the title Thor and then worked on the title Uncanny X-Men. He worked on the title Spawn for Image Comics until 2008, when he was hired by DC Comics to work on the title DC Universe #0. Later on, he worked on the story arc Final Crisis: Revelations and also on titles like Green Lantern, Outsiders, Nightwing, Batman and Robin, Infinite Crisis: Fight for the Multiverse, Convergence: Batman: Shadow of the Bat, JLA, and many more. Most recently, he helped relaunch Suicide Squad Rebirth and is doing cover work on Batman Beyond and other various DC titles and many covers for Valiant Entertainment.