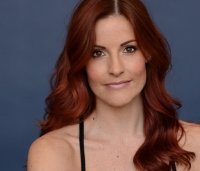 Rileah is also part of the producing power behind the popular online production group Team Unicorn. They are a group of like minded women who have created viral videos, television, and merchandise honoring the various genre-centric worlds that they so passionately love themselves. She also helms Danger Maiden Productions with partner Clare Grant. Danger Maiden is the company behind Team Unicorn, the online viral sensation SABER which won two Star Wars Fan Film Challenge Awards, BLAME IT ON SCIENCE for Comic-Con HQ, and many other female action driven productions.

Currently, Rileah is working on a couple of television and web scripts, and starting her space and science inspired swimwear line Celestial Body Swimwear.