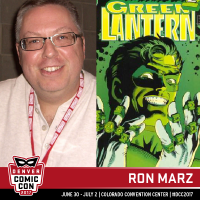 Ron Marz is a comics writer known for his work on titles such as Batman/Aliens, DC vs. Marvel, Green Lantern, Silver Surfer, and Witchblade. He has worked for many major comic publishers, including Image, DC, Marvel, Valiant, CrossGen and Dark Horse. At Dark Horse Comics he created Samurai: Heaven and Earth and various Star Wars comics. Most recently, Marz is the lead writer and Editor-in-Chief for Ominous Press, for which his first publication, Dread Gods, will be released in July 2017.