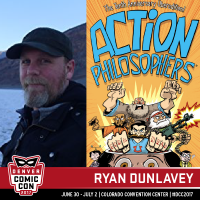 Award-winning cartoonist and part-time scout leader Ryan Dunlavey spends every day and most nights making cool comics, stories, artwork and dumb jokes for the worlds’ most charming and attractive publishers and art directors. He is the co-founder of Evil Twin Comics, along with (fellow DCC guest) artist Fred Van Lente, which produces non-fiction comics with an historical focus, such as Action Philosophers, Action Presidents, and Comic Book Comics, about the history of comics.

Although Dunlavey’s art style defies the normal hyper-realistic standard of hero comics, his whimsical style can be found on variant covers of G.I. Joe, and he created the irreverent Dark Reign: M.O.D.O.K. mini-series (2009) all by himself!