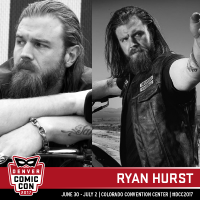 Among some of the brightest acting talents today, Ryan Hurst is recognized as a formidable creative artist who humbly and consistently brings unforgettable characters to life.