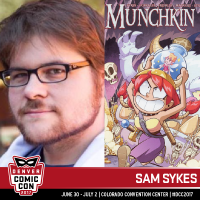 Sam Sykes is the author of the acclaimed Tome of the Undergates, a vast and sprawling story of adventure, demons, madness and carnage. His latest book was released last year, The Mortal Tally (Book 2 of the Bring Down Heaven series). He has also written many for the Munchkin comic series for Boom! Studios – based on the popular deck card game, which itself is a spoof on role-playing games. Sam will be appearing at the Boom! booth all weekend of the con.