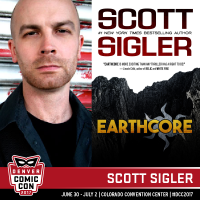 Scott Sigler is a New York Times best-selling author of 16 novels, 6 novellas and dozens of short stories in the categories of science fiction and horror. He co-founded Empty Set Entertainment, which publishes the Galactic Football League series – popular books for both adults and young adults – which seamlessly pairs the unlikely themes of sports and science fiction. He is an active podcaster, and narrates his own audiobooks, which he gives away in serial podcast form through his website, scottsigler.com. He is best known for EarthCore, the Infected Trilogy, and the GFL series. His works are available from Crown Publishing and Del Rey Books.

In 2005, Scott built a large online following by releasing his audiobooks as serialized podcasts. A decade later, he still gives his stories away for free every Sunday at scottsigler.com. His loyal fans, who named themselves “Junkies,” have downloaded over 35 million individual episodes. He has been covered in Time Magazine, Entertainment Weekly, Publisher’s Weekly, the New York Times, the Washington Post, the San Francisco Chronicle, the Chicago Tribune, io9, Wired, The Huffington Post, Business Week and Fangoria.