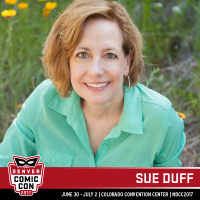 Sue Duff has dreamed of dragons and spaceships before she could even read, so it’s only natural that she now combines both fantasy and science fiction as her favorite genre. Having written since high school, Duff never took it seriously until a skiing accident laid her up for an entire summer and she turned on the word processor to combat the boredom.

A few years later, her first urban fantasy novel, Fade to Black, was one of five finalists in the RMFW Colorado Gold Writing Contest. Duff’s writing has also earned her a PEN Award, a nomination for 2015-2016 RMFW Independent Writer of the Year, three consecutive years as a featured panelist at Denver ComicCon and a coveted spot on the Denver Post Bestseller list.

She is the second oldest of six girls with an avid reader mom and her dad, the family’s single drop of testosterone in a sea of estrogen.

By day, Duff is a dedicated speech-language therapist at an inner city school district, a career she pursued much in part to her aunt who got her hooked on stories of the profession when Duff was younger. She is passionate about the work she does and regularly works to help those students that need it the most.

Sue is a member of the Rocky Mountain Fiction Writers and The Pikes Peak Writers. She calls Colorado home and when not saving the world one page at a time, she can be found walking her great dane, getting her hands dirty in her garden, or creating something delicious in her kitchen.