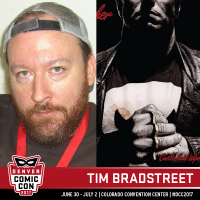 Tim Bradstreet has been a prolific comic artist for over 25 years, perhaps best known for his artwork on dozens of issues of many different series of The Punisher, Hellblazer, and Star Trek. In 2006, Bradstreet created the controversial album art for British heavy metal band Iron Maiden‘s album A Matter of Life and Death and in 2016 appeared on Brad Jones‘ Midnight Screenings.