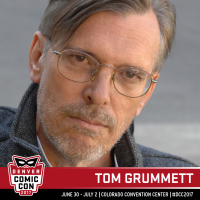 Tom Grummett has enjoyed a career of over twenty five years in the comic book industry, penciling various titles for Marvel and DC. Beginning with the New Teen Titans, he moved to regular penciling duties on Adventures of Superman, where he contributed to the Death and Return of Superman storyline. Since then he has worked on Robin, Fantastic Four, Superboy, X-Men Forever, Teen Titans, Incredible Hulk, and Avengers Academy, among others. He has illustrated comics published as a joint program between Marvel and the United States Armed Forces, and custom comics for Marvel and DC serving commercial clients. He was honored in 2015 as a recipient of an Inkpot Award for achievement in the comic arts.