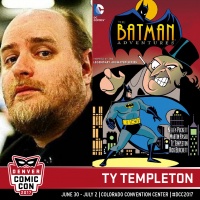 Ty Templeton’s comic work is instantly recognizable from the dozens of comic book adaptations of the DC Animated Universe shows, starting with Batman Adventures exactly 25 years ago. He also illustrated the Justice League Unlimited comic and the Justice League International and Justice League America Comics in the 90s, and will help us celebrate our 2017 JL Animated universe theme. Most recently, his work can be seen in Totally Awesome Hulk.

The Canadian comics artist began his career in the mid-1980s with the series Stig’s Inferno. The comic ran for 8 issues through Vortex and Eclipse Comics. Templeton then went on the work on such famous titles as Superman, Batman, and TV adaptations, such as Ren and Stimpy and The Simpsons.

Templeton also teaches about comics in Toronto, including several workshop classes at the Toronto Cartoonist Workshop (TCW), the most popular being his “Boot Camp” class. Templeton has opened up his own school called “Ty Templeton’s Comic Book Bootcamp”.