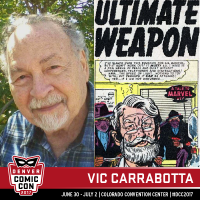 After the Korean War, Vic met Stan Lee with a letter of reference from Jack Kirby and working at Timely Comics in the early 1950s. He remained there until Dr. Wertham and Congressional investigations almost shuttered Timely/Marvel and saw many creators thrown out of work. Vic left the comic book field in the late 1950s and he never returned, instead forging a career in advertising, illustration, design and storyboards. He won many award and earned the nick-name ‘Quick Vic’ due to his speed in meeting deadlines.

Vic has created a character named Starlady and will be revealing some of that new comic at Denver Comic Con. Starlady is a black female heroine whose methods for tackling evil are the complete opposite of the violence prevalent in the genre. Instead of a blade or a gun, her weapon of choice is love. She uses a special crystal to help the villains she encounters to see the cascade of choices that have led them astray, and change for the better.

If you would like to help Vic raise the funds to continue to create this comic, please consider contributing to the Indiegogo for this purpose: https://goo.gl/dJ5GCK.