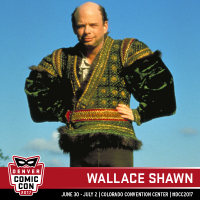 Wallace Shawn has appeared in various films, including four directed by Louis Malle: My Dinner With Andre, Vanya on 42nd Street, Crackers and Atlantic City, and five directed by Woody Allen: Manhattan, Radio Days, Shadow and Fog, Curse of the Jade Scorpion and Melinda and Melinda. He also appeared in Amy Heckerling’s Clueless and Vamps, Paul Bartel’s Scenes from the Class Struggle in Beverly Hills, Alan Rudolph’s The Moderns, Tom Noonan’s The Wife, Rob Reiner’s The Princess Bride, Patricia Rozema’s Kit Kittredge, Richard Ayoade’s The Double and Paul Weitz’s Admission. His most recent film is A Master Builder, directed by Jonathan Demme. He is the voice of “Rex” in Toy Story, Toy Story Two and Toy Story Three, and he has had recurring roles in the television shows The Cosby Show, Murphy Brown, The “L” Word, Star Trek: Deep Space Nine, Gossip Girl, The Good Wife and Mozart in the Jungle. On stage he has appeared in his own plays The Hotel Play, The Fever, Aunt Dan and Lemon, The Designated Mourner, Grasses of a Thousand Colors and Evening at the Talk House, which just concluded its world premier run at The National Theatre in London. Shawn’s plays are published by TCG Books and Grove Press, and his book of essays, called Essays, is published by Haymarket Books.