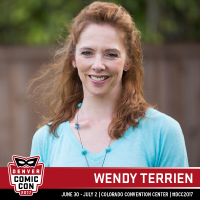 Wendy Terrien received her first library card at age two and a few years later started writing her own stories. Her debut novel The Rampart Guards (February 2016) earned a Kirkus starred review and was named as one of Kirkus’ Best Books of 2016. The novel is a #1 regional bestseller, and is the first in her intriguing urban fantasy series. She’s also a founding member of Wicked Ink Books, and released a novella in the award-winning anthology Tick Tock: Seven Tales of Time (March 2016).

Wendy graduated from the University of Utah (go Utes!) and transplanted to Colorado where she completed her MBA at the University of Denver. She focused her marketing expertise on the financial and technology industries until a career coach stepped in and reminded Wendy of her passion for writing. Wendy began attending writers conferences, workshops, and retreats.
She regularly participates in two critique groups and is the Secretary of Rocky Mountain Fiction Writers

and a member of Pikes Peak Writers. In 2014, Wendy was a finalist in the San Francisco Writer’s Contest. She is currently working on the next two books in her series, to be released May 2017, as well as a short story for an upcoming anthology from Wicked Ink Books.
Wendy lives in the Denver area with her husband, Kevin, and their three dogs: Maggie, Shea, and Boon. All three of her dogs are rescues, and Wendy is passionate about promoting shelter adoptions.

If you’re in Colorado, you may even be able to spot her by her “Adopt a Shelter Pet” license plates.