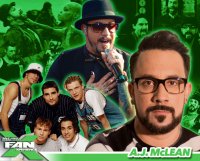 Alexander James “A. J.” McLean is an American musician, singer, dancer, actor, and entertainer. He is a member of the Backstreet Boys. McLean is also a contributor for the It Gets Better Project. In April 2002, in season 2 of Static Shock (2000–2004) McLean made a guest appearance on the show. McLean also appeared and performed with The Backstreet Boys on Arthur, Sesame Street, Sabrina The Teenage Witch, and Saturday Night Live. In 2013 ,McLean made his motion picture debut by appearing in the comedy This Is the End along with the rest of the Backstreet Boys.