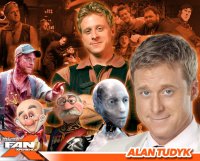 Alan Tudyk is an American actor and voice artist known for his roles as Hoban “Wash” Washburne in the space western television series Firefly and movie Serenity, Alpha in the science fiction TV series Dollhouse, Steve the Pirate in DodgeBall: A True Underdog Story and Wat in A Knight’s Tale. He also co-starred on the ABC sitcom Suburgatory and had a guest role in Arrested Development.

He also had a supporting role in the film 42 as racist baseball manager Ben Chapman and voiced significant roles in the Disney animated films Wreck-It Ralph as King Candy, Frozen as the Duke of Weselton, Big Hero 6 as Alistair Krei, and the upcoming Zootopia and Moana. Alan developed the comedy web series Con Man with his Firefly co-star and FanX Alumni Nathan Fillion and will have a motion capture role in the Star Wars Anthology film Rogue One: A Star Wars Story.